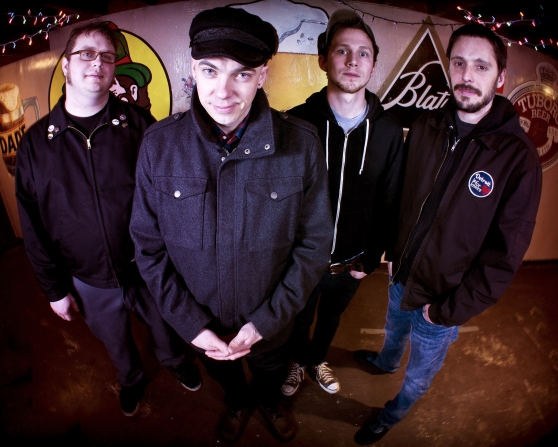 Released March 20, 2012 on Paper + Plastick Records behold the debut EP from Break Anchor.  This pop-punk outfit channels the spirit of East Bay sounds from a scene gone by and is fronted by the well-known Jay Navarro (Suicide Machines and Hellmouth).  Comprised of his own angst and battles with the trials and tribulations of his life, this EP beautifully expresses his gritty, downtrodden yet resilient spirit.  The opening track “All I Have” had me hooked from the first line; its subtle-driving guitar riff building with choral vocals only to break into a hard, driving piece that never loses momentum.  Even lyrically, I enjoy the content as it reflects some of my own sentiments living in this Great Recession economy.  The vocals scream, “Everything is money!” while I envision myself signing this at high volumes in the summer sun; my own fuck you to the establishment.

Without hesitation, the second track “Can We Pretend” is focused and hard-hitting from the start.  Carried by the punchy bass progression, it’s a personal track that is easy to relate with.  It’s raw without being unclean, passionate without being overbearing.  There is a sense of belonging in these first two tracks, fantastically conveyed to the listener in a time when the definitions of success and identity are blurred.  This brings me to the last track, “Failure of Epic Proportions.”  “You try and convince me this is what I’ve been working for/ Time flies/ I don’t know, I work so much I don’t know you anymore/ Growing up makes us forget who we were.”  Simply stated yet poignant, Navarro’s lyrics easily bring life to the heart attack feeling of measuring one’s own failures and successes.  A slower track, this last song doesn’t lose focus of the other two, despite being a more emotionally charged piece.  This is definitely one of those songs to listen to when feeling particularly disenfranchised and disconnected from the well-to-do establishment, seemingly oppressing us all.  The song then ends with the calming serene sounds of ocean waves, as if to signify the finding of inner peace through the hell and turmoil that is self-discovery.

I’m excited to hear more from this band; their music is refreshing to hear.  They have met their goal in achieving a fresh sound that is in your face while bringing to life the influences of punk rock from past days.  From the first listen I was hooked and left wanting more.  The EP never compromises the heart of its members, giving the listener three tracks of unadulterated feelings, eloquently stated while being melodically raw with rich hooks and riffs.

Break Anchor also recently debuted a music video for “A Failure of Epic Proportions,” watch below