On June 23rd, I had the pleasure of seeing Tigers Jaw along with opening bands Saintseneca and Smidley at one of the coolest venues in Philadelphia – the Union Transfer. As I walked in, Smidley (lead singer of Foxing’s side project) were starting off their set with the only song I knew by them “No One Likes You”. As a first impression, I thought they sounded very tight as a band, but definitely gave off a very awkward vibe – maybe it was the exotic “Napoleon Dynamite” esque dance moves they showed off over the duration of their set. Despite that, they expressed a lot emotion and passion, which makes any performance more engaging, especially for an opening act. Quirky and weird, but full of life. For their last song, Cam Boucher from Sorority Noise joined the band on stage and busted out playing a saxophone. This was pretty awesome, in my opinion, since I wasn’t aware Cam played any instruments besides guitar/vocals and surprisingly meshed very well with the band’s style of music. Good opener and entertaining performers all around.

The next group was Saintseneca – only reason I knew them was that members of the band were in established punk groups The Sidekicks and All Dogs. As predicted, the band impressed me immediately with rich, blending four-part harmonies and intricate lead guitar riffs. They also were very noisy and created a lot of obscure sounds through various pedals and feedback from amps. It was almost as if you mixed Pinegrove’s southern rock feel with the noisy chaos from Nirvana. Definitely enough to convince me they were worth checking out afterwards.

Last but not least, local heroes Tigers Jaw were great as always. They jumped right into playing  “Follows,” the first track off their new record Spin which immediately brought the uptempo feel needed to get their sea of fans rocking back and forth. The driving synth leads, breathy vocals, and cut through guitar tones gave me chills just after hearing a few songs. I saw the Scranton duo a couple years back at the same venue, but it was obvious that they matured a lot in their sound and songwriting. Being signed to indie label Run For Cover for some years, they most recently signed a major record deal with Black Cement Records, a subsidiary label of Roadrunner Records. Not only was I super happy for this band that I’ve been listening to since high school, but I knew that this sequence of events only meant that a great new album was yet to come, causing myself to be crazy impatient over these last few months. Throughout their set, Tigers Jaw, of course, also played some favorites such as “The Sun,” “Planes, Tanks, and Submarines,” “Test Patterns,” and “Distress Signal” in order to keep the majority of the crowd interested since a lot of fans were still unfamiliar with their newer material. Well played, guys. Well played.

All together, definitely a great show with some new bands to get hyped about. If you haven’t had the chance, check out all these bands on Spotify if you’re in need of something fresh. I know I’ll be blasting the ‘Spin’ vinyl I picked up. 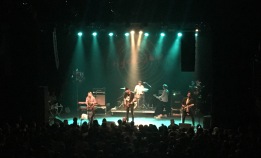 Processed with VSCO with m5 preset
Leave a Comment