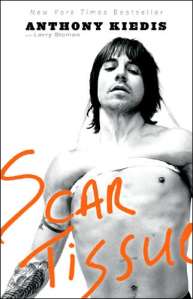 Biographies are a tricky thing.  Autobiographies are even trickier.  And most Rock Star autobiographies, are the trickiest.  They are either ghost written by another writer or have hundreds of pages of drivel and self boasting.  Scar Tissue does not subscribe to these tenets.

Penned by the Red Hot Chili Peppers’ frontman himself, this book is extraordinarily entertaining, infinitely insightful, and surprisingly heartfelt.  In addition, this book delves into almost everything, from his childhood, to his addictions, to the rise of the Chili Peppers from shady Hollywood clubs to the international stage.  It leaves no stone unturned, nor any addiction or sexual conquest left out.

I knew I had to read this book because as soon as I opened it in the store, out of the 461 pages, I landed on one with a passage that resonated with me, played certain notes in my own philosophical symphony.  This would be a recurring theme.  From the way he described his recreational endeavors, to the spiritual way Kiedis viewed music, I felt very connected with the writer.  Not uncommon in the world of literature, but very uncommon in Rock and Roll autobiographies.

The piece is quite unique in the respect that it takes us through his life, and at the same time, inserts lyrics from songs, most of which were inspired by the events just read.  “Under the Bridge,” for instance, was written by Kiedis during a three day heroin binge under the East LA overpasses while he shot up with gangbangers.  “Under the Bridge downtown/Is where I drew my blood/Under the bridge downtown/I could not get enough” ring any bells?  This continues throughout the book, giving you insight into a very dynamic life and even more dynamic writing process. I was a fan before I read the book, and an even bigger one after I finished.  Their composition style of music was something remarkable, as most of their songs stemmed from jamming out and seeing where it went.  This is something most bands lost since the hay day of expressive rock and roll with bands like The Jimi Hendrix Experience and The Rolling Stones.

Pictures of his childhood, adolescence and adult life are even included, which contain photos of him getting high for the first time: 12 years old with his father in his kitchen.  He even recounts how he lost his virginity: to his father’s girlfriend.  He talks about love lost, spirituality, addiction and music.   And it doesn’t end there.  There are far too many insights into his life, delineated so artistically and poignantly, that I can’t even begin to tell you.

All I can tell you is that you need to read this book.  It is a vivid telling of a story that needs to be told, a recount of a life lived in the fast lane, with lessons learned, diseases contracted, women loved and lost, and tragedies trumped.  Read it, you won’t be let down, and you maybe, just maybe, will look at the world a little different afterwards.  And as Kiedis says on the last page, “I may still have some scar tissue, but that’s all right, I’m still making progress.”

We all have scars.  It’s what story they tell to us and what we learn from them that matters.