I had the opportunity to see both Lost In Society and Face To Face at House of Independents in Asbury Park and was more than happy I went. To start off the night, Lost In Society dove into their set with a burst of energy and were literally ‘bouncing off the walls’ as they played. Already being a fan of the band, I was jamming out to their newest record Modern Illusions (produced by Pete Steinkopf of The Bouncing Souls) in the car driving to the show and have to say that the punk trio did not fail to impress. The combination of punchy drums, raspy vocals, and catchy melodies was enough to get the whole room dancing – even people who may have just came for the headlining act. Just watching Lost in Society perform, they were so intense and I could feel every bit of what they were expressing through their music. Some of my favorite songs from them have to be “Generation Why” and “I Want To Know”, which are both off Modern Illusions. As a surprise, Jared Hart from The Scandals made an appearance on stage to play guitar for the last few songs of their set. Needless to say, Lost In Society was the upbeat powerhouse necessary to start off a show like this one and I would highly recommend checking them out.

As for Face To Face, it’s amazing how I never really listened to them before, but they instantly blew me away with an electrifying performance. For their entire set, I was on the balls off my feet – their music was a vicious stampede of sound and you didn’t really have time to take a break. It was just one hit after another. Definitely reminded me a lot of early Bouncing Souls, but if you also mixed in some Descendents from all the power driven bass licks and complex drumming at times. The punk band from Southern California has been in existence for over 25 years and has released 10 full-length records, including their latest Protection via Fat Wreck Chords. Being the veterans they are, it was pretty rad to see so many people singing along and rushing the stage to crowd surf. Being that there were no barricades either, it was an instant go ahead for any fans that dreamed of singing some songs with their punk heroes. Overall, both Lost In Society and Face To Face killed it and if you have never heard of either, you have some serious homework to do. 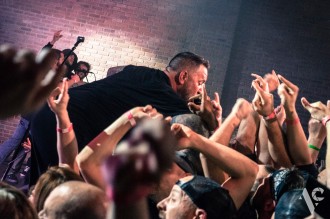 Thanks to Anthony for these great shots!