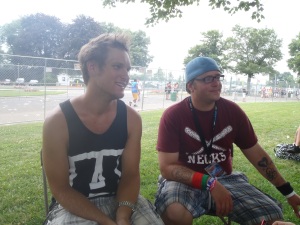 Ang:  How did you get into doing something that isn’t mainstream and makes you unique?
MCL:  I played in punk bands and then started MCing electronic beats and hip-hop beats.  In 2003 I started touring and have been ever since.  It was kind of an accident.
WS:  I was always a musician.  I was a drummer; that’s what I did as a kid.  I’ve been in a band my whole life.  I played in a band called 3 that was signed to Universal and like most young drummers, all I cared about was drum fills.  With hip-hop I always wrote rhymes as a joke; real gangsta shit.  I was a 13 year old fat punk kid and it started to become a real creative outlet.  Mobb Deep and Wu Tang’s records taught me a lot about the drums.  Then I went on to play in a band called Coheed and Cambria for nine years.  Hip-hop always played a big role in my creativity.  Coming from New York I guess that’s what kids did on the bus.  Once it became a real creative outlet, I took it seriously and it was a natural progression to make a record.  Eventually Equal Vision, Coheeds’ first record label, wanted to put out the first Weerd Science album and we did that still playing in bands.  I’m actually in another band on Warped Tour called Terrible Things.  I play drums and I try to work as hard as I can.  You know Lars heard Sick Kids my new record and put it out on his label Horris records.  Were one of the only groups that’s true DIY.  Lars has taught me a lot about that and I really believe in it.  What artist wouldn’t want to own their own record?  I might own pieces of 3 and Coheed and Cambria, but never do you own your own.  Horris Records are all about DIY.

Ang:  What’s one thing you’ve learned from each other in this hybrid of a team?
WS:  Here we are on the same stage as bands with major labels, only we get to do what we want with the money and we funnel the money right back into the art.  I think Lars taught me that it’s very possible to take care of your art, do what you want to do and believe in yourself on the same level as the big boys but do it on your own.

Ang:  Is it more liberating because you’re able to take your music places you might not have been able to without that kind of creative freedom?
MCL:  When you have someone investing in your music, that’s external; they always want to have the creative input, then they wanna make you feel small if you’re not delivering in a way that is profitable to them.  There’s a lot of manipulation.
WS:  With a major record label, you can never win.  I remember with Coheed we sold 100,000 records the first week and that it just wasn’t good enough.  The disappointment I felt from that felt like we let everybody down.

Ang:  What do you find more satisfaction-wise in your own art, more personal gain or more personal satisfaction?
WS:  I definitely do every record solid.  It’s another person whose going to put it on and hopefully it touches their hearts.  That is deeply personal to me and I think it’s the way it should be.  I think the whole DIY thing can really be a convenient stance for a band.  It’s a lifestyle and it has more to do with art and creativity then being about a product.  It all comes down to creativity and I think that’s really important.  I could not believe in that more whole heartedly.

Ang:  What can I expect to see on stage?  What kind of message and vibe do you try to send through your music?
WS:  For the Warped Tour set it’s short, so we try to keep it really high energy, do a nice mix of both our stuff and try to have fun.

Ang:  Is it just you two on stage?
WS:  No it’s a full set; we’re trying to keep the rock alive.  We believe in this stuff and hopefully that translates to the crowd.

Ang:  Do you guys have any influences that you draw from?
WS:  I mean, I still draw some of those records that became the foundation for me as a musician.  Wu Tang is a major influence and Snoop Dogs’ Doggiestyle got me into pfunk.
MCL:  I really like the independent people, like Atom and His Package.  He’s a huge influence and his stage show is so engaging.  He’s funny, tells stories and his songs were great.  Wesley Willis was this big keyboardist and his art was his sanity and his peace.  He was happiest on stage and everything is normal on stage. 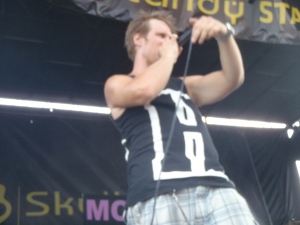 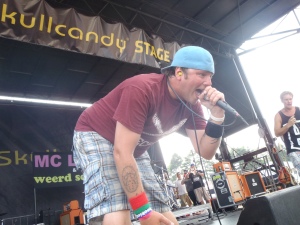