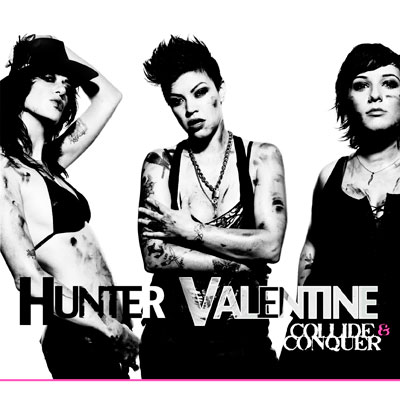 Hunter Valentine have been at this game for nearly a decade and have finally given their ever-growing fan base their third full length studio album to hold and cherish.  Collide and Conquer offers eleven tracks of the progressive alternative rock Hunter Valentine is gaining popularity for.  If you’re new to the group, I highly recommend Lessons from the Late Night as an introductory record with a follow-up of their latest rock morsel.

Upon first impression, I noticed opening track “Liar Liar” right away.  It hits you with a guitar riff that hooks you within the first five seconds.  By ten seconds in, the gravel of singer Kiyomi McCloskey drops, begging of a broken promise. All the while, the listener is slowly becoming hooked by the growing integrity of the kick drum.  Definitely a good way to supercharge anyone who’s excited to dive into this album.

The album as a whole twists and turns, varying from heavy distortion to up-tempo pop hooks and melodies.  Some of the songs, such as “Lonely Crusade,” “Crying” and “The Great Canadian Love Song” left me with a serious impression of unrequited love.  When she sings she feels like crying tonight,  I imagine we all just have nights where we feel like sobbing.  I’ve never been the type to enjoy the sounds of emo boys whining over past lovers, but her admission of wanting to cry manages to avoid any whining and actually feels like that relationship many of us have had where one person thinks things are great and the other person has rehearsed break up speeches for 3 days.  “This Bull Rides Tonight” opened up with Somer Bingham performing a melodic keyboard intro but was probably my least favorite part off the record.  It was slow and the music did not stand out as anything attention grabbing as I had experienced on earlier tracks.  However, that doesn’t mean the song is garbage all together.  This would be the part in the set where the crowd lends their voice and joins in a choral sing-a-long, spilling their collective hearts on the floor.

On the contrary, we have songs like “Gates of Hell,” “Priscilla,” “Ted’s Collision” and “Little Curse (Shit Happens)” which bring a different momentum to the music.  I enjoyed the guitar work on “Little Curse (Shit Happens)” coupled with a few throaty screams in the verses.  Laura Petracca’s bass line adds a tight, punchy edge to this song that is so important in communicating the sentiment screaming over top.

“The Pulse” was a particular favorite off this record.  It opened with minor tones and an ominous set of lyrics depicting a future waking up beside a deceitful lover and being awfully bitter about it.  As I listened, I began to imagine a woman scorned but behind her is hell-fire  not a river of sadness, as the song titles might have you believe.  “The Pulse” also threw me for a loop as it crescendos into a chorus that has a funkier groove, only to slip quietly back into a brooding state.  I also noticed when Kiyomi belts, “I’m gonna catch you,” her pledge of getting even one day, the music takes on a major tonality.  As a result, it very creatively stays within the theme of the song; angry at being burned but not getting mad, just getting even with all sorts of confidence.

But it seems to be a recurring theme with this album; dark, distorted tones and heavy drums segue into a powerful pop-type of explosion.  It threw me at first, expecting the heaviness of the verse to get even thicker come chorus time, but this routinely was not the case on Collide and Conquer.  Each song was musically interesting and different from the last track before it.  My only qualm with this piece would be closing track “The Great Canadian Love Song.”  The song states, “it’s just another love song/but it’s mine” and is most certainly a longing ballad.  For what it is, it’s nicely executed, just not my cup of tea.  But more importantly, I felt the album could have closed stronger.  For all the listener goes through lyrically as he or she ventures through the tribulations of the heart, I was left wanting something more from the closing seconds of this story.  I would have liked to have ended on the classic high note, but I do appreciate the lyrical honesty of the artist.  Maybe they chose to close out the album with that track because this love story hasn’t reached a high note yet.  Perfect for anyone bitter about love this upcoming Valentine’s Day.

It’s all in how you look at it.