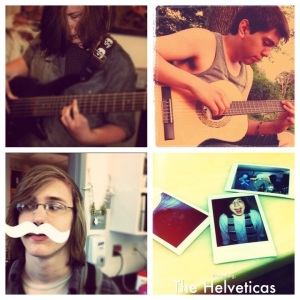 I’ve had the pleasure to watch and experience The Helveticas grow from a simple high-school band to something infinitely greater.  Their signature jazzy-indie sound has finally broken free of conventions, and has transcended into what can be called a tremendous step forward for this little band from Hartford, CT.  The true beauty of their music is how the songs are written.  Very rarely do you find a band where all members are at the same level instrumentally, and all three members are superb musicians.  All of their songs, especially the newest tracks on their debut album I’m Alright if You’re Alright, are one of the easiest set of tracks to jam to that I’ve ever heard.  For a band of high-schoolers to create a record where all songs stand independently, but also come together even greater is truly a marvel.  Even if you didn’t like the band when you first heard them, I implore you to go and give this new album a listen on their BandCamp.

Surprisingly, even their oldest tracks have been tightened and given a new sound, a greater sound.  Their jazz training can be heard in the best way, and every track is a wonder to listen to.  However, as most debut albums are, there are still imperfections.  With only one vocalist and almost no harmony, it’s easy to get a bit tired of the same vocalist and vocal stylings by the end of the album.  I hope for their next release, they decide to occasionally switch up vocalists or add more complex harmonies apart from the rare backing vocals on this album.  In that same vein, as a long-time listener, I was hoping for a few new tracks to supplement the plethora of older tunes that they’ve played for nearly two years now.  Of course, if this is your first time listening, then they’ll all seem quite awesome.  One of my favorite parts of the record is an instrumental track added to the beginning of “She Killed Me,” one of their oldest songs.  It truly showcases what I love best about these guys, great music that keeps evolving, getting better and tighter.  So again, listen to The Helveticas, it’s more than a pleasant surprise.