Do You Feel Auto-Tune Has A Pervasive Negative Effect on Society’s Perception and Consumption of Music? November 16, 2011

Do you feel that Auto-Tune has a pervasive negative effect on society’s perception and consumption of music? 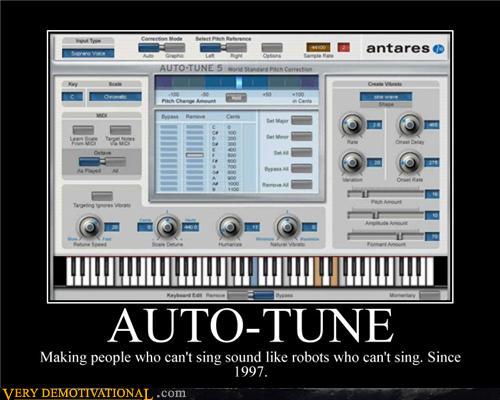 TNT
Yes, Auto-Tune has a pervasive negative effect on society’s perception of music.  When musicians created music before the days of auto-tune, they were considered talented artists.  What happened?  Today, to have a hit song, it has to have an electronic sound fluffing over the mistakes or notes where the pitch just wasn’t met?  I don’t think so.  I can understand that auto-tune may have a place in society’s music, but it does not need to be the center of attention.  It does not need to define mine or anyone’s musical preference because it is not a talent or art form, it’s pressing a button to modify your voice.  I don’t know how I’d react if someone told me their favorite type of music is anything auto-tuned.  Probably the same way I reacted when I heard Snoop Dog did a song with Katy Perry, nauseated and confused.

Jake Davis
Auto-tune is the lowest form of music, in my opinion.  It takes talent out of the equation, allowing America to focus even more on how people look, dress and act, regardless of what they have to say.  Take any group or artist that regularly uses auto-tune while maintaining their real voice, all you’ll see is how fake they are.  I, of course, excuse techno and electronica because they base their entire sound off of computer generated tones.  For everyone else, it makes them sound tiny and unnatural.  And what happens when they get on stage?  Disaster, pure and simple.  If this doesn’t sway you, think about classic music that stands the test of time.  Frank Sinatra, The Ramones, The Beatles, Black Sabbath are classics because they had true talent and musical ability, not a good team of computer techs behind them.  So, pop artists of today, lay off your sound crew and perhaps get some lyrical and musical rehearsal in, you’ll thank us in the long run.

Orin
Auto-tune haytaz, in the immortal words of T-Pain (from his song, of the same name) “calm the fuck down!”  I believe, in the future, every song will utilize auto-tune.  Imagine the Star Spangled banner!  Oh…wha?  They have that?  Um…you’re saying I can auto-tune anything?  h…I already have the app on my phone, you say? Okay, it’s a bit much… OhhHhHh nOoOoo it’s nooOOooooOTT!!! I LOvve iiiTttt! “U got meE… U got meEEeeee…”

oZ
Yes, auto-tune does affect people negatively.  I feel that auto-tune tracks manipulate the impressionable, unimaginative mind into robotically shaking their body (or buying into) to nonsense with a catchy chorus.  It seems auto-tune produced tracks, are produced in such way to compensate for lack of content, originality, skill or even just inability to sing on key.  However, this does not in any way insinuate that there are no ‘good’ songs made in auto-tune.  After all, auto-tune was created to correct inaccuracy in songs, not to decide if a song is good.  Furthermore, it is used in other ways and at this point is standard in professional studios.

Mark
God YES.  At one point, it had a more understandable purpose.  Let’s say an artist has done 12 takes of a vocal, and the 2nd take is by far the best with the only problem being a few minor note issues (too flat, too low, etc).  To have a program that would allow a producer to keep the best performance while correcting some of the not so great parts would be a godsend, as it was nothing more than a neat and helpful tool to make the mixer’s job easier.  But with the mainstream unveiling of this new technology in Cher’s 1998 single “Believe,” little did music audiences world-wide realize that it had signaled the official beginning of the end for not just talent and perseverance, but for musical integrity.  Not to mention the creating of a gimmick ridden crutch that the industry for some reason refuses to go without, even though it can very well stand on its own without it.  Lacking anything as costly and time-consuming as market research, all one needs to do to find out just where music (not to mention its lazy and complacent audience) currently stands as a whole is to listen to the radio.  It’s nothing but an overproduced, over funded and underwhelming wasteland where auto-tune and its talent-less slaves rule supreme.  I am not sure who is to blame anymore…the industry/producers or the public.  On one hand, there’s the industry and all who function within it, who are responsible for auto-tune being EVERYWHERE, in pop songs, rock (I’m especially talking about you Nickelback), folk, country, etc., with the main culprits not surprisingly being (in my opinion) the shittiest genres of music, R&B (correction: MODERN R&B) and rap.  Why an “artist” who rhymes words together would need his or her voice to be notationally corrected is beyond me.  But apparently, in general a dance track isn’t considered marketable (or danceable unless it is auto-tuned), a rock song isn’t great until the vocals sound unnatural and robotic (way to hate on dance music by using their exact production, assholes) and folk isn’t as down-homey until that vocal sounds “natural”.  Or maybe it’s the audience, who willingly eats this shit day after day without so much as a peep of any sort of displeasure, the only ones speaking up being the pretentious indie snobs, but then again, they always complain, and no one wants to listen to them anyways.  Thank god for music.

Angela
Yes, auto tune has a pervasive negative effect on society’s perception of music.  I find my ear picking up more and more musical phrases adjusted with auto tune.  The radio serves as my main source of music and as a haven for auto tune.  It seems to me that artists rely heavily upon the technology to perfect their work.  As a result, I’m inclined to believe that artists are either so mechanically engineered that their reputation and brand appeal matters far more than their talent, or are so insecure about themselves that producers everywhere are given green lights to massive creative edits.  I’m not entirely sure if this is simply an American pop music type of phenomena or if the music industry is allowing technology to reign supreme over the perfectly flawed organic nature of the human body for a more polished approach.  I understand that it’s a business that requires advertising, marketing and merchandising like any other, however I don’t seem to understand how artists who typically are so passionate about what they do, can sit comfortably existing as fraud.  Additionally, one then must ask what effect this is having on up and coming artists perception of themselves and their work.  Moreover, this affects the listener as it creates unrealistic expectations of the talent.  I have found many a recording artist who can put out a fantastic album but leave stadiums of people disappointed in concert.  If a band or musician decides he or she would like to be nothing more than a packaged deal with a shelf life and a team of song writers, then by all means go ahead and enjoy the ride – just don’t conduct interviews like you take the “art” you create from the depths of your soul and christen the fans with it so that they may be born anew in the melody of your auto-tuned choruses.

Hoverbee
Yes, I feel that auto-tune has a pervasive negative effect on society’s perception and consumption of music.  When it was first used by recording artists as an addition to or an effect on a certain part of the song, it was for creative or expressive purposes.  Now it seems to be used by almost every artist no matter what, even in concert settings.  Auto-tune is just as bad as lip syncing to a prerecorded track.  You don’t actually have to sing, or should I say that with auto-tune, you don’t actually have to know how to sing.  Which means any talentless person can put out a record and have perfect pitch.  The result is shoddy music disguised by technology that the public consumes as if it were the real deal.  Auto-tune is offensive to those musicians with talent who can actually sing and who spend time honing that talent.

Daniel Edward
Auto-tune definitely has a negative effect on perception and consumption of music, but it also depends on what music you listen to.  Too much Top 40 is auto-tuned within an inch of its life, and a lot of real talent (except for Adele) gets lost in the thumping club beats and trash pop.  Auto-Tune has syphoned the need for vocal talent from music.

Klone
The biggest problem with “auto-tune” is that it’s something the public even knows exists at all.  Tantamount to the “movable panel in the back of the Aztec Tomb” (anyone catch the reference?), “auto-tune” is supposed to be a hidden trick up the sleeve of sly studio engineers and editors.  It’s a tool in a music producer’s arsenal of equipment to deliver a high quality product to a demanding public.  It was meant to be used sparingly and to correct particular moments of a singer’s performance that may have faltered during recording (or if the particular singer isn’t really all that talented, but somehow in the ways they will, landed themselves a recording contract).  When considering the expense of studio time, and the editor’s time, if you could fix a momentarily missed key for just the second it happened rather than have the artist record another take, you use the tool.  That said, it is meant to also be something unnoticeable, and the fact that this crutch is now being used as the main attraction, it cheapens the integrity behind the performers.  There was a time before auto-tune where a performer had to bring it or go home.  These days, seems any Joe Shmo can step up to a mic, click the auto-tune on and become the next big thing.  When you think of it in those terms, the ONLY effects on society’s perception and consumption of music has been pervasive and negative…at least, as far as learned appreciators of music like us.  For those who’ve never known music without auto-tune, say anyone 16 and younger, this entire question probably seems silly.  That’s what’s sad.