Are the 70s back?  Did somehow the 80s sneak in on the action too?  The answer is an enthusiastic yes, as Bryan Ferry took to the stage at the Wellmont Theatre in Montclair, NJ for a stop on his ultra-rare tour of the U.S.  What was extra rare was that I was one of the youngest people in the audience, with the exception of two or three poor souls dragged by their parents into a night of reliving their youth that they had no interest taking part of.  But no matter, because whether it was an oldie trying to reclaim their youth, or a youth looking to experience a piece of what now vintage music is all about, everyone was there to have a good time.  And it came off without a hitch.

The evening kicked off with retro-funk style openers the Phenomenal Handclap band, who led what seemed to be a low-key set, which fit well into the general vibe for the evening, but not into what I could tolerate leading into main act Bryan Ferry.  And judging by how many people chose to stand outside of the main stage area until it was time for Ferry, I wasn’t alone in my thoughts.  There wasn’t much worth mentioning, as I am unfamiliar with their material, but after their set I had no real desire to dig deeper.  Their music wasn’t terrible; it really just wasn’t for me. 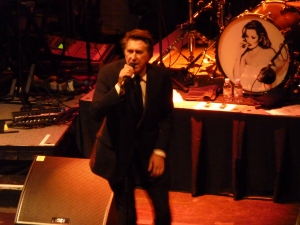 However, there would be a savior for the evening.  As the notes to set opener “You Can Dance,” from his latest release Olympia rang through the theatre with its powerful, dreamy ethereal qualities, Ferry didn’t so much take that stage as he almost seemed to smoothly glide onto it, fitted in a custom tailored black suit and tie looking like the same dapper gentleman he has been since the days of Roxy Music.  One look around as he opened his seductively crooning voice, one would see a crowd captivated by the singer’s every word and motion, and it didn’t let up for the duration of the evening.  As he effortlessly moved between standing vocals and synth/keyboard duties, Bryan Ferry made the Wellmont Theatre his own den of cool for the evening.

At 66, his voice isn’t quite as powerful as it used to be, but it still sounded polished and soothing, still easily keeping up with the pace of the professional crew of musician’s sharing the stage with him.  And where power lacked, he utilized a 4 back-up singer set-up to help keep the pace, not only keeping the songs in proper form, but also adding a unique sound element to the vocal melodies, expanding the strange beauty of each tune in a way that even the most powerful singer couldn’t do on their own.  It certainly helped, working best on such songs as Roxy Music-era favorite “Avalon,” helping to give it a more intimate, sweeping feel and the ever funky “Kiss and Tell,” giving it a more Wall-of-Sound feel.

An interesting note to the evening was the addition of an intermission of what I had believed to be mid-set, instead of just set #1.  Although it’s unclear whether the break was due to age, the condition of his voice or just for the hell of it, it actually added something to the evening.  By breaking the set into two seemingly separate parts, it gave the set a classier air, as if Ferry was saying “No need for any encores.  As long as we play it cool and pace it right, the crowd will leave feeling satisfied.”  And he was right, as set #2 began, the band reintroduced themselves with the beautifully subtle instrumental “Tara,” which was led by his ever-talented guitarist and saxophonist/keyboardist (whose names escape me, apologies).  Highlights of set #2 included “Slave to Love,” and a quite unorthodox cover of Bob Dylan’s popular composition “All Along the Watchtower,” which had been deconstructed and remolded into a suave, sophisticated sounding experience by Ferry for his 2007 cover album, Dylanesque.

The only complaint with the evening was the seemingly sudden end to the show.  As soon as he completed what turned out to be the final tune of the night “Jealous Guy,” Ferry gazed at the crowd, accepted the cheers of the fans, briefly muttered “Thank you and good night” and slyly ducked off stage.  It was truly a ‘blink and you miss it’ feeling moment.  All in all, although a full set had been played, it was still sad to have the experience ended on such a subtle note.  Regardless, Bryan Ferry is definitely a timelessly cool act worth seeing, and one who will never bore, and simply cannot disappoint.