For the 5th consecutive year, the 3rd at its current location, the Union County Musicfest has tried its damnedest to bring the best musical acts that the industry has to offer to Union County, NJ.  And despite the fact that it is not a free concert (our tax dollars at work), I nonetheless appreciated the county’s attempt to do something enjoyable and worthwhile with our hard-earned money.  With past headliners such as LIVE, Cheap Trick, The Alarm, Chuck Berry and Third Eye Blind, among many great artist bookings, the promoters had a lot to live up to if they were going to get another massive turnout.  And for 2011, again they did not disappoint, bringing in such notable acts as Collective Soul, Ed Kowalczyk of LIVE, Blondie, Toad the Wet Sprocket, The Smithereens and Southside Johnny & the Asbury Jukes for the citizens of Union County and neighboring areas to check out. 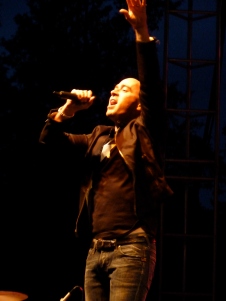 Leading off the Friday night portion of the rock show was recent former lead singer of Live, Ed Kowalczyk.  Thankfully, just as LIVE had sounded when the band had headlined the Musicfest a few years back, Kowalyczyk brought the same skill and energy back, playing a tight and rocking show, albeit with a different crew.  The set bounced between the obvious inclusions of LIVE songs (with “Selling the Drama,” “I Alone” and “Lakini’s Juice” being the real standouts), peppered with cuts from last year’s debut solo release Alive, which strangely rocked harder than the actual studio album sounded.  Regardless, the set was great.

Bringing the evening to a close was a standout set by 90s alternative heroes Collective Soul, who played an absolutely amazing set.  In fact, they were so good, the fest could have ended right on that Friday night and I don’t think anyone would have cared.

They kept the night moving at just the right pace, playing all the songs that any fan would want to hear (with the night’s versions of “Run” and

“Shine” being the best of the set), perfectly mixed in with a few obscurities, a random crowd request (the always great ‘Gel”) and a strange impromptu fifteen minute cover/freeform/writing session type jam mid-set, which turned out to be a strange highlight to the evening.  On a personal note, what made the evening even better was the positivity exuded by the ever so charismatic front man, Ed Roland.  While he was the consummate rock star on the stage, working the mic stand and dancing across the stage without managing to look Steven Tyler silly, he took the time, he exuded personal warmth that quickly engulfed the audience.  It was clear that he loves what he does night after night, and he not only made sure everyone knew it, but that everyone got to share in that moment. 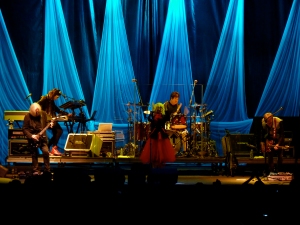 Saturday evening brought the group that was touted as the main headliner for the entire weekend, Blondie.  And honestly, I am not sure what to make of what I heard.  On one hand, for a band that has been around in some way for over 40 years, they definitely did a great job, rocking the most loyal of fans and the newbies (like me) for almost 90 minutes or at least until the town curfew kicked in.  They played very well, ripping through all their hits, peppered with some of 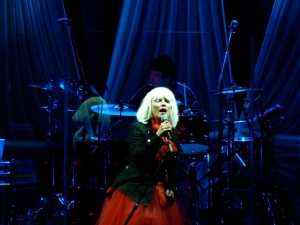 their newest tracks for good measure, (which sound very cool, by the way) and brought a lot of enthusiasm and nostalgic charm to the stage, which held the rowdy crowd captivated.  On the other hand, although I hate to say it, they really showed their age during the set.  Debbie Harry can still sing quite well, but she can’t really hit the high notes anymore; she can still sing decently, but now every song is played at least an octave down from how it was originally performed.  I am getting tired of giving bands the benefit of the doubt due to age, among other factors, and this group is where it ends.  Realistically, if you can’t perform it the way it was done x-amount of years ago, then maybe you should stop playing it, even if it is a mainstay.  Then again, I don’t want it to sound like I am really trashing Blondie, because they were really good, even better when you stack them against a few of the still existing bands with their longevity.  It’s really a tough call, but it’s more accurate to say that I truly enjoyed their set, just not as much as I had hoped I would. 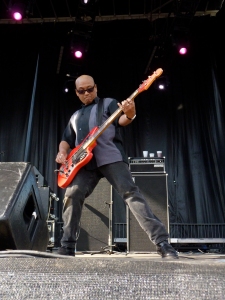 older crowds, as the lawn chairs were definitely in attendance.  You can always tell how old the crowd is by how much the acts on stage rock out and how little their supposed fans move during the songs.  It was like watching people watch paint dry, with the exception of a small group who huddled up to the barricades; at least they were dancing around and having a great time no matter how ridiculous they looked.  First up was one of New Jersey’s biggest and longest lasting rock acts, the Smithereens.  Having seen the act before and expecting a great show, they did not let anyone down.  Although it became obvious that they didn’t expect to play as long as the set times allotted (there was a lot of extended songs, stalling banter and the odd inclusion of the Star Spangled-Banner), it was still a great way to kick-off the last day of the fest.  Now that’s how an older band does it. 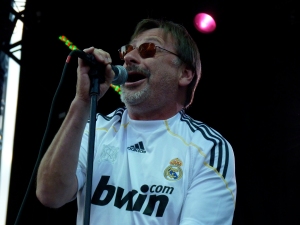 The day was capped off with a rocking set from New Jersey bar-room blues mainstays, Southside Johnny and the Asbury Jukes.  At the risk of trampling on Jerseyans pride, I have never really been a fan of what many consider to be “the sound of the Jersey Shore”.  For the longest time I found it to be very outdated and a boring, muddled style of music that wreaked too strongly of its past musical influences.  But barely 10 seconds after the Jukes took the stage and ripped into their first song, I had an instant change of heart.  The 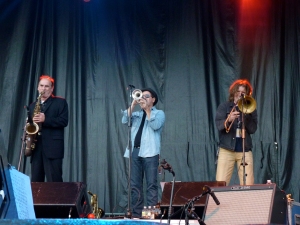 combination of Johnny’s voice (which sounded like someone broke a whiskey bottle in his throat while he was drinking it) and the striking horn section yanked my attention away from photo shooting and right to the center of the stage.  Basically, the tunes weren’t strong enough to urge me to run out and buy all of their albums, but it was definitely good enough for me to have enjoyed the show, and to have made a casual fan out of me.  Even with all the aging fans planted front and center rocking out like it was 1975, Johnny was the one who seemed to be having the most fun, giving a performance expertly leading with his highly skilled band of musical veterans, not bad for a 63-year-old Rock ‘n’ Roller.

The only blight on the weekend was my one major complaint: the Freeholders.  Right before every band took the stage, the mind-numbingly irritating “announcer” had to strut onstage and, along with the same barrage of unnecessary sponsor announcements and suck-up thank you’s, the good ol’ Freeholders had to be brought up postage and introduced to the crowds time and time again!  Otherwise, everything else was swell.  The UC Musicfest 2011 managed to deliver yet another year of fantastic rock acts, minus the egos.