On July 23, 2011 I said screw the heat wave and headed to Nassau Collisuem in NY for my 9th Vans Warped Tour.  Complaining about the tortuous temperature was not bring relief, however, huddling in the shadows of merch tents and chilling on the air-conditioned Monster Energy truck did.  The first band I checked out was Sick of Sarah.  I am not usually a fan of female rock bands, but these chicks can play.  I enjoyed the live set more than their recorded tracks for the fact that there was more energy and less harmony.  The songs I recommend are “Bittersweet” and “Not Listening.”

Next I headed over to the Nintendo 3DS stage to check out Moving Mountains.  Before their set started, I caught the last couple of songs from Simple Plan.  I was slightly shocked to see them on the tour, but their new album is not too shabby.  Lyrically, the band grew up.  I really enjoy their single “When I’m Gone.”  They ended with crowd pleaser “I’d Do Anything”.  Oh high school, oh reminiscing.

I’m happy to now cross Moving Mountains off my list of bands to see.  When previewing the band, I was reminded of The Get Up Kids (think On A Wire) with a touch of Brand New, which is extremely rare.  The band owned the stage and their performance was nothing less than phenomenal.  “The Cascade,” “With One’s Heart In One’s Mouth” and “Where Two Bodies Lie” are my favorite tracks.  I can’t wait to check out their albums.  Emo music used to be good back in the day when it first became a popular, yet it is still a misunderstood and undefined genre.  This band reminds me of that; like when ’emo’ wasn’t such a shameful word.  I deem this band mandatory to check out.

The Narrative was up next at Kia/Kevin Says stage.  Local natives to Long Island, NY, the crowd filled rather fast, and more were gathering as each note played.  I loved “Fade” and “The Moment That It Stops”.  Their voices (Suzie Zeldin and Jesse Gabriel) are just so pleasant to hear with melodic hooks and lyrics.  When I take my next train ride, I know “Trains” will be on my iPod.  The music paints a great picture of the best train ride you’ll ever take; like you’re 5 years old and it’s your first time on one.  I get Tim Burton vibes from this song, but that’s probably just me.  The band may not have been something I would expect on the tour, but hey, the times they are a changin’.  We’re All Warped.

A break between bands to check out the sites and find some shade.

I love the cloths from Sooshi Clothing Company.  They have these adorable plush wasabi/ginger duo and sashimi.  Sadly, they’re only up for raffle, so I opted for a shirt, this one.  Skull Candy was selling head phones for $10 on top of throwing some free pairs into the crowd.  There were giant drinking water trucks with “durkin water” to fill up your water bottles and misting tents to cool down.  The Monster Energy truck was on site providing air-conditioned seating and free Monster drinks.  I love the Absolutely Zero; it’s energy without the guilt.  Oh, and of course I couldn’t forget to catch some skaters!

I have to admit, I had no idea Middle Class Rut consisted of only two members Zack Lopez (vocals/guitar) & Sean Stockham (vocals/drums).  Before there set, I had only heard their single “New Low,” which I love.  I wish I could say the same about their other tracks, but didn’t care for them.  Was it lacking something?  It still felt like a full sound on stage, but it got repetitive after a while, and this coming from a gal who loves her jam bands.  I didn’t stick around for the full set and of course, “New Low” was played last.  I heard it half way across the venue and thought to myself “Fuck,” but sang along to the chorus anyway.

When I was checking the lineup of the tour this year, I knew I had to make a stop and hear Lucero.  Again, a sound I thought I’d never experience on Warped Tour.  This alternative/country/punk band from Memphis had just enough punk rock in their veins to spark my interest.  I’m picking up Lynyrd Skynyrd, Bruce Springsteen and at times and Gaslight Anthem.  It’s something that everyone can enjoy and I appreciate them being on the tour.  “The Devil and Maggie Chascarillo” is a must hear.  Listen here.

The highlight of the day was watching Less Than Jake perform while standing on stage left.  Taking pictures in a photo pit is awesome, but stage shots just rock harder.  Less Than Jake takes to the stage like a fish to water (or the smell of weed at The Expendables’ set); they are natural performs and there was never a dull moment on stage.  They were fast to point out some visions of Long Island; Chris Demakes told a young girl who flashed her tits to “Put them away!”  Rightfully so, good move Demakes.

Another issue/concern they pointed out was the haircut choices of the crowd; lots were sporting the Justin Beiber do and that was not going to fly.  The band pulled up on stage one of the look-a-likes and made it a point that this had to change.  JR revealed the mohawk strip and buzzer.  The original kid chickened out, thus proving the wimpy look and demeanor the Beiber cut holds, and a true punk rocker was selected.  He let JR and Buddy shave his head into a mohawk.  Not over yet, the band pulls a girl from the audience for the freshly mohawk rebel to make out with on stage.  Only downfall to the onstage mohawk was my location and the direction the wind.   Thank God for giant speakers to duck behind to dodge the hair.  “Mr. Personality” from their new EP Greetings From… was a big hit, as were all the classics.  They deliver so many songs in one set it feels like they covered everything I wanted to hear.  I was happy to hear three tracks from TV/EP released back in October 2010, the theme songs to Animaniacs, Spongebob Squarepants and i-Carly.  Before I knew it, we were asked to leave the stage and the band was performing their last song.  What a great experience!  Coming soon, NVMP’s interview w/ JR!

Big D & The Kids Table was up next, another Warped veteran on bill.  I wasn’t able to catch their entire set, but still had a great time.  They played some tracks off of their new album that dropped on 7/5/11, The Damned, The Dumb and The Delirious.  Ska music is getting scarce these days, so you have to appreciate the classics.  Sure, there are new bands coming out w/ brass sections trying to keep Ska alive, but remember your roots;  both LTJ and Big D have been around since the 90s.  Ska is a genre of music.  If you don’t like it, then you don’t have to listen.  Fact is, the sound has never changed; ska music is known for having a horn section to tie together the elements of a rock/punk band.  Ska music will always have a place on my iPod.

Another new band I’m happy to have discovered this year is Go Radio on Fearless Records.  Hailing from Tallahassee, Florida, these rockers have some dangerously addicting songs that had me practically paralyzed at the stage.  The lyrics are catchy and the hooks are strong enough for me to have just used the word “paralyzed”.  This is Jason Lancaster’s band since leaving Mayday Parade.  I got a good taste of this band to make me definitely dig deeper into their music.  “Goodnight Moon” was #8 on the Billboard Heatseekers chart and sold more than 15,000 copies in 2010 off of Do Overs And Second Chances.  “Any Other Heart” was great live; lots of passion and energy, and definitely a song that drags you in and leaves you wanting more.

No strangers to the tour, up next were The Expendables.  Ryan DeMars made a quick statement before their set, something to the tune of ‘light ’em if you got ’em.’  A minute later, the audience smelled fantastic and the mood mellowed out.  I love reggae.  I love punk.  I love The Expendables.  “Down Down Down” and “Sinsemilla” are my favorite tracks.

Another new band to check out was Blacklist Royals.  I hear Rancid and the Ramones with a taste of Gaslight Anthem, which means it grabbed my attention immediately and deserves a fair listen.   Their stage presence was pure energy and they knew how to keep the attention of the crowd.  Great set and will definitely be checking out more of their music.
“American Hearts” and “Sick of Sin” are great tracks to start with.

The last band I was able to catch was illscarlett.  These boys are certainly no stranger to VWT, and this year, Lyman selected them to play the entire tour.  You’ve come a long way illscarlett, from playing your music at the gates of Warped Tour to rocking out on the whole festival!  Dub rock is a type of music that is extremely hard to hate, or at least that’s how I feel.  Yet again, their live set was able to get the crowd to unite and puff, puff pass.

All in all, it was another successful year at the Vans Warped Tour.  I can’t help but to feel that the theme this year was fusion bands.  With acts like Larry and his Flask, Lucero, Lionize, Peelander-Z, MC Lars and Weerd Science, River City Extension, all combining different elements of various genres, it lets us hear music we might have never listened to.  IE- I’m not a fan of country, but Lucero is pretty damn sweet.  In River City Extention there are eight members and that alone is enough of a fusion to create a unique sound.  We’re all warped, see you there next year!   Thanks for everything. 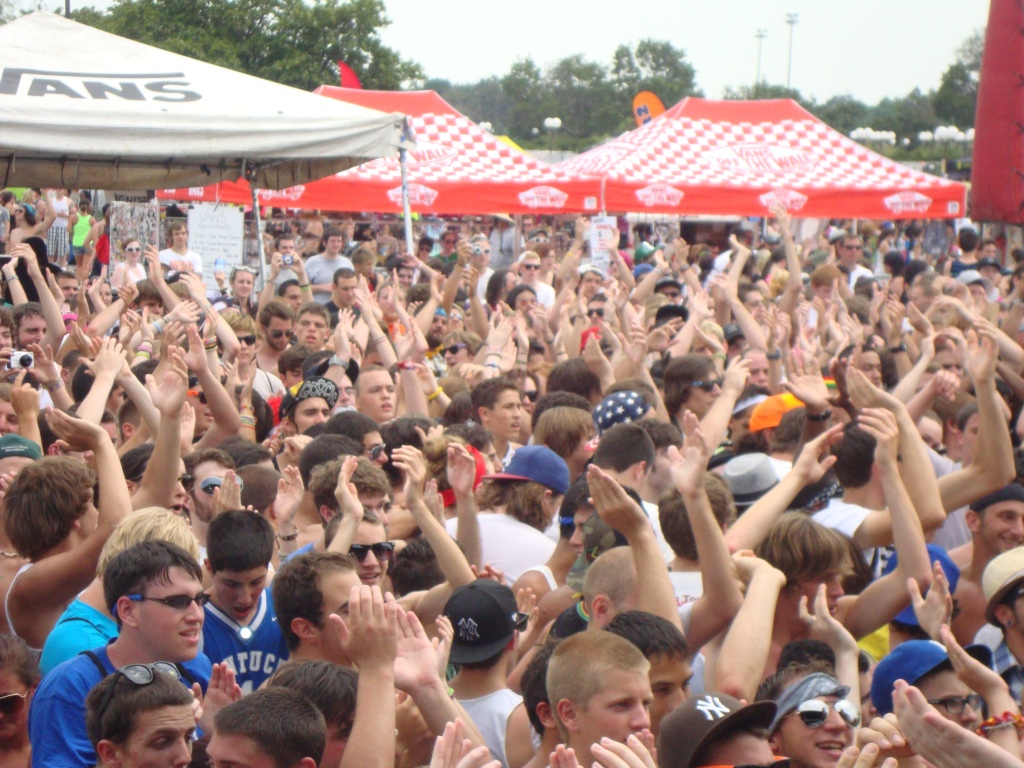 Here is a slide show of the best pictures I took at Warped this year, enjoy!