A Review by Alexander Stigz Castiglione

Driving around South America with a spider monkey in his pocket, stinking up the car with rum-drenched monkey vomit…Nailing a pig heart to Jack Nicholson’s front door while blaring a recording of animals dying from a boom-box in the woods…Throwing an IBM Selectric typewriter out the window and firing a few .44 caliber rounds in it. 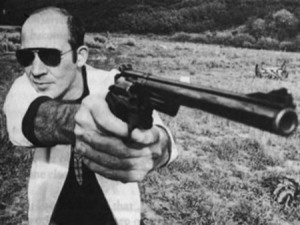 Off color?  Definitely.  Madness?  Maybe.  Hunter S. Thompson doing all of this?  Absolutely.

And those stories are only the beginning of a life steeped in booze, sex, drugs, and the American Dream.  Gonzo takes these stories, climactic and wild as they are, and presents them in such a way that you close the book, actually feeling like you knew Gonzo himself.

Thompson fired literary bullets with fury and precision, much like the machine gun of the same name; belt fed on a diet of drug and a menu of madness, Hunter Thompson “shot out of the womb angry, and left in exactly the same way.”  This biography written by two of his colleagues at Rolling Stone magazine truly illustrates the eccentricity and enigmatically magnetic man who Hunter S. Thompson was.  In the form of an oral biography, they talked to hundreds of his friends, family, colleagues and acquaintances.  From his wife, to actors Johnny Depp and Jack Nicholson, all the way to his fellow writers at Rolling Stone, the book tells a story from every conceivable angle.  Some thought he was a genius, others thought he was a prick; the beauty is that the book let’s you decide.

And it does this by being filled with wonderful little nuggets of information that most people in my generation wouldn’t know.  Did you know Thompson ran for Sheriff of Denver?  He actually got pretty close to winning.  How about how the writer of Fear and Loathing in Las Vegas spent his free time?  Yes, that’s right, shooting at gas cans and propane tanks at Owl Farm when he wasn’t writing insane and incisive contemporary literature.  What was a “Hunter Breakfast”?  A six-pack of Heineken, half a grapefruit, a hard-boiled egg, and a few joints of some primo Thai stick.  For lunch?  A little LSD here, some burgers there, and some booze everywhere. 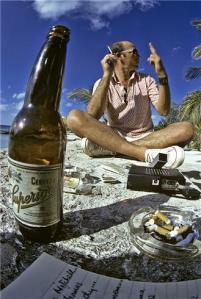 There are extremely too many stories in the piece to even begin to touch upon all of them, and several times, I was laughing so hard, people were looking at me like I was tripping on acid myself.  From the Christmas cards he sent out to friends and family that said “Ho!Ho!Ho!  I shit down your chimney! – Hunter” to his sexual conquests, all the way to his prolific and infamous drug use, it is the understatement of the century to say Gonzo lived “an interesting life.”  But it doesn’t key in on these things specifically.  I don’t know about you, but I didn’t think the Fear and Loathing author possessed, as one story-teller put it, “the keenest political mind” he had ever encountered.  He rubbed elbows with Presidential candidates, actors, musicians, drug dealers, and bikers alike, something extremely rare for an artist/writer in any period in history.

Some parts of the book drag on, while others you’re flying through, reading fifty or sixty pages before you realize it.  Overall, the wildly outlandish stories outweigh the mundane little tidbits about his home life/work ethic/family.  Stick with it, and you will be laughing your ass off.

One thing is for sure: Still waters may run deep, but the raging rapids of Thompson’s life are vastly more interesting.  Read the book.