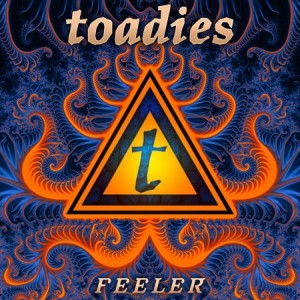 Let me start by saying that I’m not the biggest Toadies fan.  In fact, “Possum Kingdom” made my Top 5 list of songs I never want to hear again.  Still, I have to say that “I Come from the Water” is a great tune.  Due to my lack of enthusiasm, I was a bit fearful of reviewing Feeler.  I decided to give it a shot anyway.

Feeler was recorded in 1997 and was meant to be the follow-up release to Rubberneck, the album with the tracks mentioned above, but was shelved when Interscope decided it was not good enough.  Although the band feels “a bit of redemption” releasing the album now, I can see why Interscope decided not to release it.  Please don’t get me wrong, the album isn’t horrible.  It doesn’t lack the definitive sound of the Toadies, yet something is missing.

When a band has a hugely successful first album, much emphasis is placed on the achieving the same level of interest with the second.  Rubberneck is an album with eleven fully developed songs.  The structure of these songs follow some semblance of order and do not feel thrown together.  Feeler, however, has only nine tracks and they sound incomplete.  The most developed track on the album is “Deadboy” followed by “City of Hate” and “Mine.”  The other tracks on the album are well-intentioned with stable beginnings, but then seem to go off on a tangent.  Tracks such as “Waterfall,” “Joey Let’s Go” and “Pink” go all over the place, have jerky transitions, and have endings that sneak up on you.  Not that all music has to follow a formula or an order.  Many bands are quite well-known for jamming or lacking an overall structure, but the Toadies aren’t one of those bands.  If this album had been released following Rubberneck, many a Toadies fan would surely have been disappointed.

The release of Feeler provides an opportunity for die-hard Toadies fans to get their greedy hands on an album they’ve been waiting to hear for nearly thirteen years.  For the rest of us, it’s probably best to skip this one and go for their 2008 release No Deliverance.

One Response to “Review: Feeler by Toadies”