TNT’s #7
7. Metallica (The Black Album) by Metallica – Classic.  No matter what, this is my go-to Metallica album.  Mom played it all the time and I had the track list memorized from repetition.  I think I’ve gone through phases of favorite tracks off this album.  While all these songs are epic, when I was younger, “Enter Sandman” was my admired song (I loved the “Boom!” that Hetfield screams).  “Wherever I May Roam” defined my teenage years and today, “Don’t Tread on Me” takes the cake.

Mark’s #7
7. Love and Rockets by Love and Rockets – My introduction to the experience that is L&R via the warm and poppy sounds of Vinyl.  This is one of the few albums that was an immediate favorite of mine and continues to be until this day.  When a band successfully mashes rock, goth, blues, soul and industrial together, how can you go wrong?

Angela’s #7
7. Keasbey Nights by Catch 22 – I fucking love this album.  It introduced me to the band and the reason I skanked my heart out at many a show.  Including one of which I am very proud to say I got knocked in the face and chipped a tooth at.  I never get sick of it, so it’s amazing.

Stigz’s #7
7. Appetite for Destruction by Guns N Roses – One of the best albums of the last 20 years.  Period. 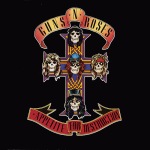 Klone’s #7
7. Facelift by Alice In Chains (1990) – The debut album of one of my favorite bands of all time.  This was the album where Alice In Chains “found themselves” and formed the cohesive unit that championed the grunge movement into the world of alternative rock and metal.  This record was their Polaroid of the Seattle of the early 90s, a dark and brooding city where Jimi Hendrix had been laid to rest.  Their songs reflect a world of confusion and disillusionment, coupled with the growing pains of dealing with the censorship of the media, the reality of youth crime and the drug epidemic taking the country by storm.  The beauty part of their music is that even if you don’t care about any of those things (and if that’s the case, you may want to double-check your pulse to make sure you’re not legally dead), you can still love the songs because they absolutely kick ass.  Notable selections from Facelift : “We Die Young”, “Man In The Box”, “Bleed The Freak” and “Love, Hate, Love”.
http://en.wikipedia.org/wiki/Facelift_%28album%29