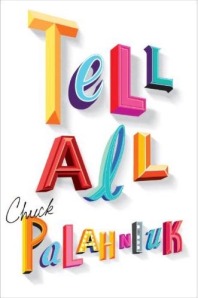 Anyone that knows Chuck knows what to expect when they crack the spine of one of his gritty novels.  They know that they are about to get hit with a hyperbole-soaked, loathing-enriched story that’s high in distaste for the human condition and low in moral fiber.  This piece is no different, and its disturbing qualities are only exceeded by its truthfulness, no matter how hard it is to accept.

For the rabid Palahniuk punks, this book is a synthesis of earlier works, like Diary, Survivor, Invisible Monsters, and a few nuances of one of his most offensive pieces (as if everything Chuck writes is not omnisciently offensive and equally unnerving), Snuff. The story is simple: It follows a washed up Hollywood starlet and her personal assistant/savior/guide/maid/confidant.

From a literary standpoint, it is equal with all his other works when it comes to storyline and plot points, however, voracious fans of the nihilistic writer (like myself) will most likely have the whole story figured out by page 70.  However, this book, unlike other pieces by Palahniuk, is unusually short – only weighing in at around 170 pages.  Don’t be mistaken though, it’s dripping with disdain and laced with equally lovable and loathsome characters throughout.

With this particular book, I cannot really say much without giving away the plot, but do yourself a favor and read it!  It’s not a hard read like Pygmy, his previous release, and film buffs will love the name dropping that he subtly ties into the subtext.  He comments on film legends like John Ford and DeMille, but also draws light on the lesser known tragedies of the silver-screen starlets in true Chuck fashion.  Like every other book, you will be full of useless knowledge and disturbing factoids about the world’s most timeless and well known faces and behind-the-scenes geniuses. From Bogart to Hitchcock to Minelli, no name is safe and no star in the sky of Old Hollywood is given refuge.  He bares his literary teeth, and bites the ass of America’s favorite past-time: Sitting back and watching someone else live their ideal life.  Like I said, this is pure Chuck, however brief the novel and nobody is safe.

Like his other work, he continues to find new and interesting narrative devices to separate him from the rest of the post-modern, post-anything writers that live on the shelves of bookstores worldwide.  Just like his journalist in Lullaby using the newspaper ads to tell us something or via the false medical diagnosis in Choke, he writes through the eyes of Hazie, who is writing her screenplay as we read the book.  In this particular piece, he indirectly calls out the cancer of name-dropping and brand name subservience that, more and more in today’s fast paced world, everybody is contracting.  I don’t want to ruin it, but by page six, you will have heard enough about this actor or that director, this face cream or that designer purse.  And he lays it on thick, as always, to really have you thinking outside of the standard framework of modern decadence and look at the absurdity of it all.

Rabid Chuck fans: Go out now and get a first edition!  Newcomers to the poet Palahniuk: read his earlier stuff and then devour this: you will not be disappointed.