Filed under: Can You Believe This?! — NVMP @ 3:05 AM
Tags: "Rock You Like A Hurricane", "Wind of Change", James Kottak, Klaus Meine, Matthias Jabs, Pawel Maciwoda, Rudolf Schenker, Scorpions, Sting In The Tail 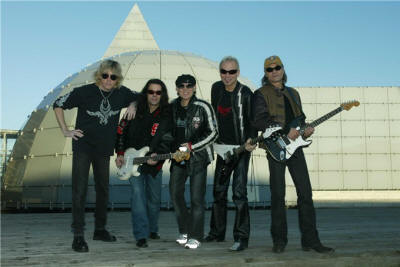 Is it just me, or do you hear an all-to-familiar whistling on the wind?  Are those the “Wind of Change” I hear blowing, or is it just the arctic blast making my eardrums ring with icicles?  Nope…it was the news that long-time rock icons Scorpions are throwing in the towel.  Is that chill a sudden sadness?  Or could it be the fact that, uh, well…I kinda thought that happened already.  Okay, assumed is probably a better word, but doesn’t news like this kinda serve more to remind us that these guys existed at all, let alone are breaking up?  Maybe I’m just out of touch.

I’m sorry, I don’t mean to sound harsh.  Who can really say they haven’t done a non-Jersey Shore-guido fist-pump, or banged their head to “Rock You Like A Hurricane”?  I’d be lying if I said I haven’t.  Who can really say they haven’t raised a lighter at a party when “Wind of Change” comes up in rotation at the end of the night?  Hey, I’ve been that guy.  Great songs are great songs, no matter when they were written or when they were popular.  Some things just can’t be denied no matter how hard you try.  That said, I don’t think I’ve heard anything from them since 1980-something.  Now, if I were a resident of Germany, perhaps the case would be different.  I certainly hope that some of our German readers would fill us in on some of the accomplishments this five-decade rock blitzkrieg has been amassing since our last early-90s keggers.  I feel it more than appropriate to get that, “Oh yeah, those guys?” reaction when hearing the news of their retirement.

Fear not though, true believers.  For the rest of you out there who are finding your Scorpions thirst still requires quenching, the band that was founded in 1965 by guitarist Rudolf Schenker, now 61, will not being going quietly into that good night.  They will rage against the dying of the light with a farewell world tour in support of their farewell album Sting In The Tail, due out on March 19th.  The tour will kick off in Prague on March 15th, and spend the next few years making its way around the globe.  So, keep your ears to the digital airwaves and make sure to keep checking in with your friends here at NVMP for the latest news about when Scorpions come stateside.  It’ll be your last chance to catch Klaus Meine, Matthias Jabs, Rudolf Schenker, Pawel Maciwoda and James Kottak, the current and final line-up.