I have to admit that I was quite biased against Saosin, my only experience with them being an irritating ringtone clipped from the chorus of what could be the one-thousandth ‘please don’t kill yourself’ type of song called “You’re Not Alone”.  Aside from this one over-clichéd travesty of a song, I had no prior musical knowledge of either Saosin or the other featured acts on the 2009 PacTour.  I tend to ignore anything that even slightly sounds of emo or progressive rock; if I wanted to be bored to death by that repetitive/cookie-cutter/interchangeable shit, I would go work in Hot Topic.  I fully expected to spend the evening clawing at my ears as I drowned in a sea of posers.  The night did start off on a promising note: as I arrived early to get a good spot in the photo pit, I was greeted with a mysteriously closed Irving Plaza.  Lucky for me, the sign on the window announced a change in venue to the Gramercy Theatre, which is an even more cramped venue a few blocks away.  Thanks for the last-minute heads up.

I wouldn’t know what to say about this band, as I didn’t have the chance to see them; the show was listed on Irving Plaza’s website AND the ticket as starting at 8’o clock.  Even though I had to spend an extra 10 minutes walking to the alternate venue, I still arrived a few minutes before show time, and was greeted with the sound of what I thought to be an early starting Eye Alaska on stage.  Nope, as I learned later, they had finished several minutes beforehand.  Terrific.  On a side note, I did listen to some of their tracks on YouTube later on that night… No thanks.
Rating: Shrug 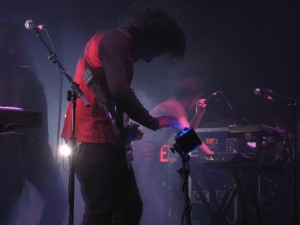 What I thought was the first song in Eye Alaska’s set turned out to be the electro-rock stylings of Innerpartysystem, which I only discovered as the set ended.  I wasn’t very receptive to these fellows during their first song, but found myself mildly digging them as the set jogged on.  The set was equivalent to being at an alternative rock rave, as trance and rock duke it out in a room of people who had no idea what to make of the spectacle.  Stand out tracks for a first timer included the frenetic swaying of “Last Nite in Brooklyn”, the She Want’s Revenge-esque “This Town, Your Grave”, “Die Tonite, Live Forever”, and my personal favorite of the night, “Don’t Stop”, which was firmly lodged in my brain thanks to the catchy “This is Entertainment” chorus.  As much as I hate to admit it, they were a good band with good stage presence, complete with nite-club strobes and live vocal tweaking that drew me in and caused me to groove out.  Thanks a lot Innerpartysystem; I won’t ever be running out to purchase your albums, but I liked your set.  And please give me your tweak box/vocoder contraptions.
Rating: Pass

I did dub P.O.S. the obvious joke, Piece Of Shit, after listening to some of what I felt were promising but still less than desirable tunes on YouTube.  His set could be summed up in an early comment he made to the crowd, “Some people are hell-bent on not liking Hip-hop, so I want to see all of the peeps not having fun, as I rap at them for the next hour”.  And he did just that, tearing up his set with a mish-mash flow of controlled chaos; layered over commanding beats reminiscent of sped up jazz grooves, being trampled over by tribal beats (in a good way).  Judging by the crowd’s response by the end of the set, the MC and his trusty DJ succeeded in winning a good portion of the scenesters over.  Standout tracks included the punk intensity of “Drum Roll” and “Optimist”, which features a rigid beat equivalent to the sound of tap dancing on acid during an earthquake.  The only problem to be had with his set was actually the fault of the sound man, who laid the base on so heavy that it made most of the random music samples damn near inaudible.  All around pretty good.
Rating: Sold

When it comes to emo bands, I get more of a thrill listening to the drums being tuned before the start of the set, and this situation was no different.  Sadly, headliner Saosin proved to be the weakest act of the evening, lacking the attention grabbing presence of the earlier acts, instead relying on the usual emo charm towards the pseudo-loyal crowd.  This was not a shared sentiment, as the crowd of young-ins finally awoke from their hip-hop enduced coma, as Saosin took the stage around 9pm in a swirl of smoke and lights, railing out a two song free-for-all that the crowd seem to eagerly devour.  All I could wonder at that point was where these people were when the other acts were on the stage.  They played a 75 minute set, which seemed to be continuous, as I couldn’t tell one song from the other.  I also had no clue what songs were being played (thanks in part to the band not announcing many of the songs that they were playing).  But thanks to the audience having a karaoke simulcast with the band, I was at least able to somewhat follow along and guess the song titles.  In all honesty, there was a song or two that I did find to be mildly listenable, but just as with earlier bands, the dreaded sound man peaked all levels and successfully drowned most of the audibility, which is completely unnecessary for such a small venue.  I guess it makes the music better.  By the time “You’re Not Alone” was played, an hour in, I was thankful I had earplugs to prevent total deafness.  They ended their set with an eight minute jam following “They Perched”, which I chose to watch comfortably from the TV’s downstairs.  They ended the show by 10:15, so all the ‘tough as nails’ youngsters could get to bed in time.  Hooray.
Rating: Not for me

All in all, the 2009 PacTour turned out to be a decent show.  Although their style of music makes me queasy, Saosin really has to be given credit for putting together an eclectic roster of acts.  Not a lot of bands would be ballsy enough to select the counter genres of electro/rock and rap to fill out a show bill; this goes double for a progressive/emo band.

All photos taken by Mark B. and Lauren B.