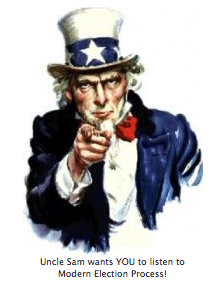 ‘Modern Election Process’ is a representation of the rhetoric and manipulation that takes place during U.S. presidential elections.  The piece is ordered like a fugue, each distinct political sample enters as a voice and then is edited to act as counterpoint against subsequent entrances.  For those of you who are not familiar with what a fugue is, it is a musical form where multiple voices, or parts, enter the piece in succession and then act as complimentary to the new entries.  To put it more plainly, one voice enters, makes a musical statement, then another voice enters while the first plays a secondary role to the new part and this relationship continues with each new entry.

Part of my goal here was to show how much is hidden from the public during the election process, so I took segments from President (then Senator) Obama’s “A More Perfect Union” speech and broke them down to their base frequencies and layered the fugal sections on top.  The idea being that the “truth” is unrecognizable underneath the facade that most Americans see during the time leading up to a Presidential election.  The aesthetic is meant to be strange and disconcerting to the listener, much like if one were to really listen to, and examine, the insults and ridiculous assumptions that candidates profess about each other during their campaigns.

This is not meant to be easy on the ears, it is not meant to be something that one would sit down and listen to time and time again.  This piece stands for nothing besides what I layed out in the preceding paragraph, its sole purpose is to stimulate genuine thought and criticism of our Modern Election Process.

To listen to ‘Modern Election Process’ please visit Sean M. Davis’s fan page.
The song will be on the music player to the left.