Filed under: CD Reviews — NVMP @ 5:41 AM
Tags: "Since We've Been Wrong", De Loused, Frances the Mute, Mars Volta, Octahedron, The Bedlam in Goliath 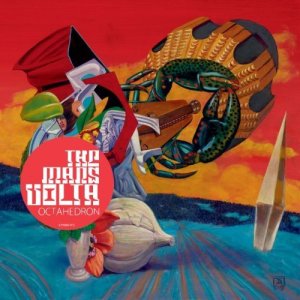 I was at my house recently, smoking a joint, and I thought that I would give Octahedron, the new Mars Volta, a listen.  I was a little iffy, given the fact that I did not enjoy their last record The Bedlam in Goliath too much; it didn’t really sound like the good ol’ Mars Volta to me.  They did not seem to put as much energy into the record like they have done with De Loused and Frances the Mute.

So I downloaded the record (legally of course)  and to my surprise, I loved every single track.  ” Since We’ve Been Wrong” is one of the greatest tracks that the band has produced in a very long time.  During the course of the record, you kind of have the sense that it was a one shot recording because the tracks seem to cross fade into one another so perfectly.  Octahedron is like Voltas earlier work, you either immerse yourself into it hard or you let the frantic crazy guitar riffs and chaos surround you.

It’s hard to tell what the underlining meaning of this record is.  With every Mars Volta album, what the lyrics are about and what interpretation the songs may have are always up for discussion.  I would definitely tell any Mars Volta fan to pick this up or download; just give it a listen and prepare to get your mind blown away!