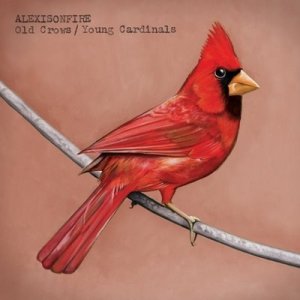 Alexisonfire’s new release, Old Crows/Young Cardinals, is everything you’d expect from –the quintet of Canadian post hardcore rockers.
The opening, and quasi title track, “Old Crows”, foreshadows the rest of the album.  Lyrically that is.  With a chorus like “we are not the kids we used to be”, this track hints where you are about to go musically: A trip on a record, which shows growth as a band, and mental growth in the lyrical content.  “Young Cardinals”, the second track and remaining half of the albums title, shows how the band maintains their aggressive progressions and biting vocals, however, the bars laid down by George Petite and Wade MacNeil are nothing short of noteworthy.
Excuse the pun.

Most of the tracks on this record will have your speakers earning their keep and may be responsible for a speeding ticket or two.  Tracks like “Sons of Privilege” and “Born and Raised” have some driving riffs tearing though the song which are perfect for a long road trip to nowhere at high speed.  The lyrical content in this album really does show their growth as a band, and as human beings, as there are a lot of existentialist themes and prevalent comments about society in general, once you get beneath the rocking vibe of the entire album.

However, they do slow things down, and let the pipes of the main vocalist shine through.  In a downbeat borderline-ballad flow that runs through a few tracks, like “The Northern” and “Midnight Regulation”, you can attest to growth in the sense of vocals and delivery.  However, the final track “Burial” truly is a credit to their ability as a band, and this closing track, is a tightly composed downbeat groove with an intimate feel.  Usually I wouldn’t be into a slow jam, but coming from a band that rips it up as much as they do, I find the fact that they can lay down a ballad not only competently, but extremely well, something to be noted.

Don’t get it twisted, it’s still the Alexisonfire that breaths flames from the stereo, however, this record truly shows their growth, and is another big step from their last album, Crisis.  If you dig Alexisonfire, you’ll love this new album, Old Crows/Young Cardinals.  If you don’t know who they are, give them a listen. Then pass the torch to the next person looking for some good tunes.